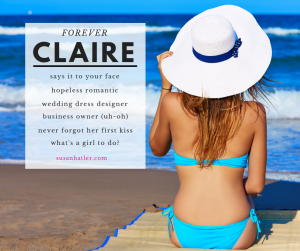 Glad you dropped by to check in! I’d like to share a little with you about the heroine in Forever in a Kiss (Kissed by the Bay series, 7), which releases this April. Stay tuned for a little sneak peek, too.

Claire Davenport is a hopeless romantic, who never forgot her first kiss, and won’t settle when it comes to love. Unfortunately, making her wedding dress design business successful is more challenging than she originally thought, so dating has to go on the back burner for now.

Missy immediately becomes Claire’s most important client, but Missy is beyond demanding when it comes to her wedding dress design. Missy even enlists help from the best man, who turns out to be Alex Murphy, the one who captured Claire’s heart during that game of Spin the Bottle all those years ago.

Alex is a sexy scientist now and all grown up, except he’s also determined to stop Missy’s wedding. Claire can’t let anything hurt her chances with this client, so she’ll do whatever it takes to stop Alex, even if it means showing him that true love is not only possible but sometimes standing right in front of you.

Here is a sneak peek from Forever in a Kiss:

Forever in a Kiss

Alex crossed his arms, raised an eyebrow, and leaned against the only open wall in my cluttered office as he assessed me with amused eyes. I promptly forgot everything, absolutely everything I was going to say. I vaguely recalled feeling angry or indignant or some other strong negative emotion toward him, but when he blinked innocently my belly did a little flip.

Were his dark eyelashes even longer than I remembered?

How could he even see past them?

What would they feel like if I brushed my lips along them?

I shook my head and tried to focus. There had definitely been something I’d planned to say to him. I could feel it on the tip of my tongue. Words that needed to be said and were super important, but then I glanced at Alex’s mouth and my mind went blank. Seriously, I couldn’t have named a single wedding dress designer at that moment if my life depended on it.

As if he could guess where my mind had gone, his eyes danced and his lips quirked up at the corners. But how could I be expected to speak at the sight of those adorable dimples? It wasn’t my fault that words failed me and my belly decided to do somersaults.

“You’re staring at me, Claire.” He flicked his wrist to glance at his watch, which had the same faded leather band I remembered from high school. “Like what you see?”

“No,” I said, stammering some nonsensical noise as Alex turned toward the door of my office like he planned to leave. My brain whirled and protested like a fifteen-year-old computer rebooting. I was going to stop him from something. But stop him from what?

“It’s been fun,” Alex said, turning the door handle and then winking at me. “We should stare at each other awkwardly without saying anything again some time. See you later.”

The man was so infuriating.

I hope you liked this sneak peek from Claire’s story, Forever in a Kiss, which is available for pre-order on Apple Books and Amazon. Happy reading!!

** Receive a FREE sweet romance book when you sign up for Susan’s Newsletter: http://susanhatler.com/newsletter **

« My Books & Awesome Deals for You!
Forever in a Kiss: Alex Murphy »